Bow Tie Guy of the Day: The Llama 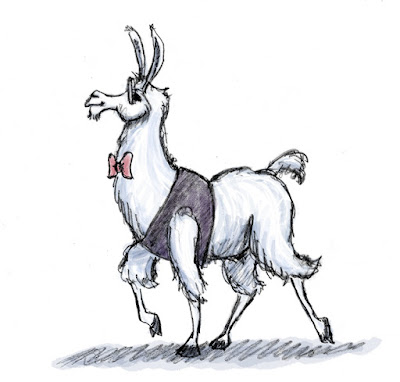 This domesticated animal originates from the Andes. It is a member of the camel family. They are known to spit at each other to solve misunderstandings within the heard.

Llamas are just fun to draw.
Posted by Barclay at 2:23 PM No comments: 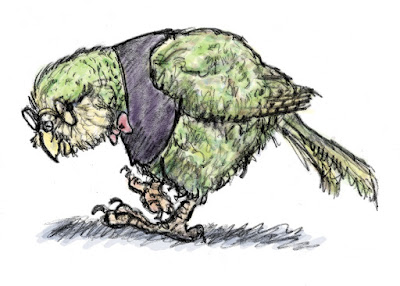 The kakapo is a large flightless parrot found in New Zealand. It is also called the owl parrot. They are on the critically endangered list with only 124 known left to alive today. There is a strong push to save this bird which is threatened mostly by non native predators in New Zealand. New Zealand's department of Conservation has been relocating the Kakapo to refuge islands.
Posted by Barclay at 3:22 PM No comments:

The more I study the manta ray the more I am fascinated by it's simple form and beauty. They are amazing creatures. The manta ray are listed as vulnerable on the endangered species list due to pollution, entanglement in fishing nets, and harvesting for medical purposes.
Posted by Barclay at 11:55 AM No comments: 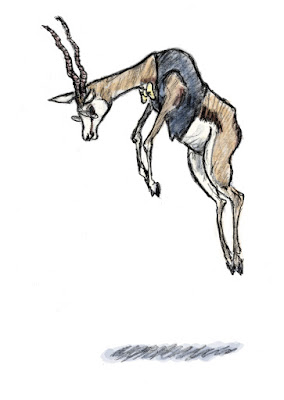 I mentioned earlier that I started a pint rest page to help me collect visual references. I love the discoveries I find there. I was fascinated by the leaping of the springbok and I knew I had to draw one.

The Springbok is a member of the antelope family and can be found in southwestern Africa. There are three subspecies of the springbok, the normal (depicted here) the black springbok and the white springbok. I might draw the other two later. They differ mostly in color.
Posted by Barclay at 4:54 PM No comments:

The humpback whale is placed as least concern on the endangered list as their population is increasing. I am mostly familiar with them through Star Trek IV the Voyage Home, where the crew of the Enterprise went back in time to collect two endangered humpback whales to save the future of Earth and repopulate the species. It is amazing what a movie can do to help bring awareness to a problem.
Posted by Barclay at 4:34 PM No comments: 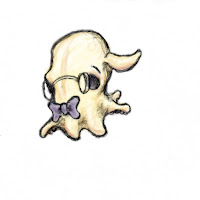 Hovering just a little bit over the sea floor, these are the deepest sea living octopi. They are called the combo octopus because of their similarity in ears with Dumbo, the elephant from Disney's cartoon.

I have attempted these before with various success. I am pretty happy with this one. You can see a plethora of them on my illustration for the letter D.
Posted by Barclay at 12:40 PM No comments:

Found in costal areas, estuaries, and rivers of South and SouthEastern Asia, the Irrawaddy Dolphin is similar in appearance to the beluga whale. The most distinctive difference from other dolphins is their short beak. They have been placed on the vulnerable list of endangered species. Their major threat is from bycatching. More information on the irrawaddy dolphin can be found at the World Wild Life web site.
Posted by Barclay at 3:08 PM No comments: 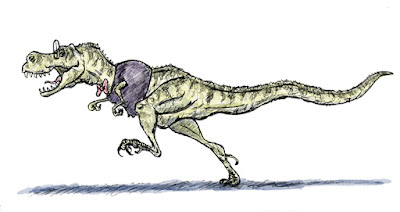 When growing up, This was the biggest and most frightening dinosaur I knew. Similar to the loss of Pluto we have discovered so many more that are larger and more frightening, but there is still a soft spot in my heart for this guy. They lived during the late Cretaceous period and are known for their powerful jaws and their teeny weeny front legs. 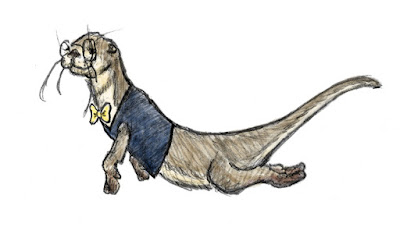 When I told a good friend of mine about my crazy plan to do a Bow Tie Guy of the Day for the entire year, she told me I otter do this one. So here it is, the otter.
Posted by Barclay at 11:25 AM No comments: 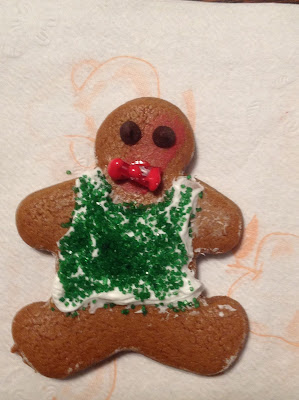 My youngest son had been waiting over a month to make ginger bread cookies. I decided to take this opportunity to work in a different medium than I usually do. Here is the Ginger Bread Bow Tie Guy. We had a fun evening as a family making them.
Posted by Barclay at 8:13 PM No comments:

Named for Dr. Philbert Commerson, a French naturalist, that described them in 1767. it is more commonly known as the Panda Dolphin, Skunk Dolphin, and Piebald Dolphin.  I have been drawing a lot of dolphins as of late. This is to play of of that and my recent focus on pandas as well.

There are two classifications of Commerson's Dolphin on is found at the south end of South America. The other is found near Keruelen Island.
Posted by Barclay at 2:31 PM No comments: 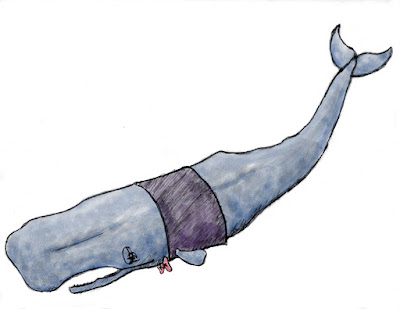 The Sperm whale is the larges of the toothed whale that normally feeds on squid. They are listed as vulnerable on the endangered species list.
Posted by Barclay at 1:54 PM No comments: 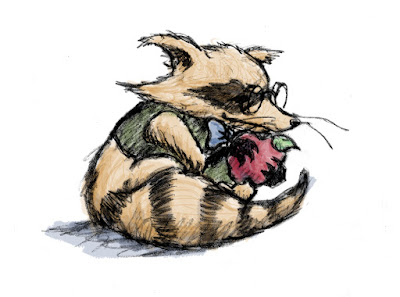 There is a great deal to be said about deadlines and accountability. As a professor of art, I understand the importance of drawing daily, but it is easy to have other demands crowd out drawing time. By doing this project, I am forcing myself to draw more often. This will improve the work I do and also give me more opportunities to draw. In the process I hope to complete more full illustrations as well. Some of these are being used as studies for other projects I am working on.

Today, I wanted to show the mischievous nature of the raccoon.

This sleek dolphin is distinguished by it's lack of a dorsal fin. They are differentiated from their northern cousins by location (they are found in the southern hemisphere and and the northern ones live in the north) and their black and white markings.

Again I am fascinated by the wide variety of animals on the planet. I also love drawing dolphins. They are rather fast to draw and they look cool. At one time I was asked what my favorite football team was (I do not watch football). My answer was The Miami Dolphins, because they have cool helmets with dolphins on them.
Posted by Barclay at 6:58 AM No comments:

I needed to do something a little different today. It has been a while since I drew a dinosaur. This one is known for it's bony head. In fact it means thick headed lizard. It lived during the Late Cretaceous Period.

Posted by Barclay at 7:12 AM No comments: 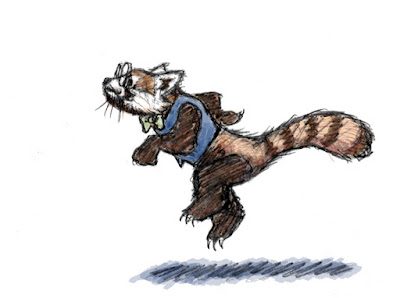 There are less than 10,000 Red Pandas in the wild. They predominately live within the Eastern Himalayas and are threatened by deforestation of the trees they live in and the bamboo, getting caught in traps meant for other animals and for poaching. If you want to find out more on how you can help save them you can go to the World Wildlife Federation here.

I thought it would be good to show a little of my process. I start out collecting a large amount of images. I have recently found that Instagram and Pintrest have a great deal more images than just a google search. I started a pint rest page of animal references that can be found here (Pintrest Site.) 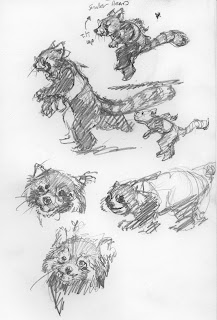 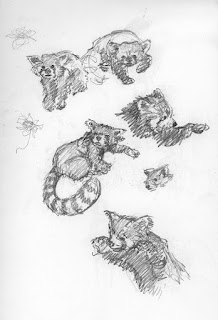 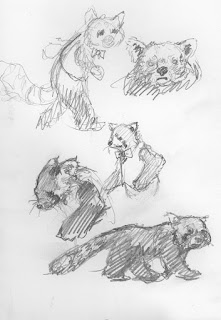 I then do a number of sketches getting used to different proportions. This is a particular animal I have been struggling with. Here are a number of sketches I did before I felt comfortable enough to do a final. I think it is important to realize that we do not always get it on the first try. It is also important to explore options and allow yourself to do some bad drawings. This is the way I learn. It gets frustrating at times, but I always work through it.
Posted by Barclay at 1:46 PM No comments: 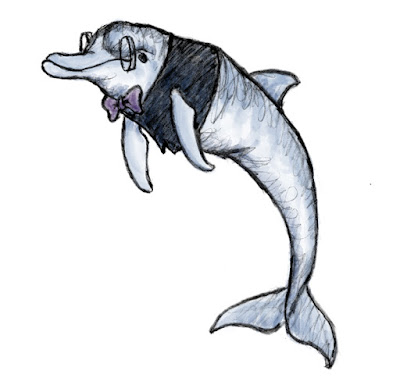 I never realized there were so many dolphins. This will more than likely be the first of many. Although listed as least concern (there are around 600,000 living in the wild), they are still  on the Endangered Species list. Threats to the dolphin are bycatch, costal development and environmental degradation.  To learn more about them and other endangered species you can go to the World Wildlife Foundation site here. 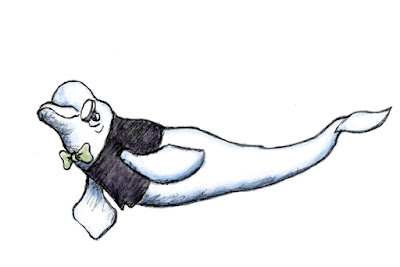 I have been aware of the Beluga Whale for some time. I love the size of their foreheads. It is called a melon and it can change shape which allows them to make facial expressions. They are related to the Narwhal.  The Narwhal Bow tie Guy can be seen here.

The Beluga whale is threatened by ocean noise and oil and gas development. For more information on the Beluga Whale and what you can do to make a difference go to the World Wildlife Federation website.

I love doing this project. I have discovered so many new and different animals. They are all so unique, beautiful, and odd. This makes me appreciate the world we live in more and more. It is so amazingly diverse. It is remarkable how interconnect everything is as well. The more I draw, the more I learn. The more I learn the more grateful I am for the world we live in and for the blessings we have received from God. 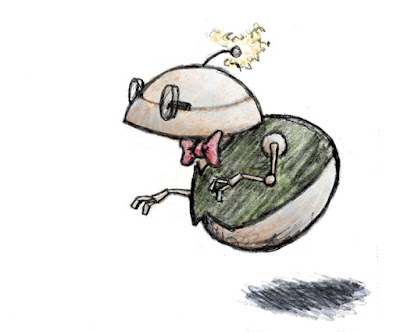 This robot has been floating around my doodles and sketchbook for some time now and has finally made it into the public. I attempted to depict rust. I think I still need to work on it. I also approached the eyes different from what I normally do for robots. Small changes to push myself in a different direction.
Posted by Barclay at 9:17 AM No comments:

The black-footed ferret was once thought to be extinct, but over the last thirty or so years they have reached a population of around 300. These are the only native ferrets to North America. Loss of habitat and decease are still contributing to their extinction.

For more information on the black-footed ferret you can visit the World Wildlife website. 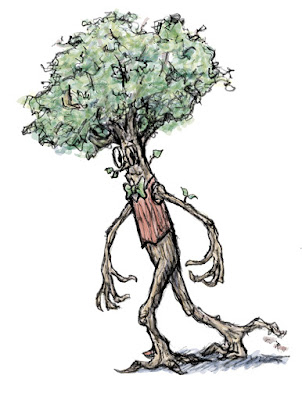 Since I will not be posting on Saturdays and Sundays, this Ent is in honor of J.R.R. Tolkien who was born on January 3, 1982. His writings have influenced me greatly. The last time I read The Hobbit and the Lord of the Rings trilogy, I realized how masterful Tolkien is with his writing. Not only does he choose his words wonderfully but the way he structures his sentences is musical.
Posted by Barclay at 3:27 PM No comments: