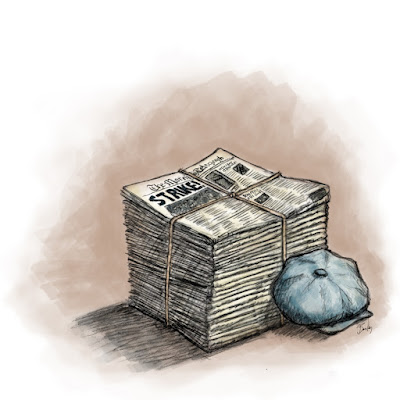 It's been a busy week. This is the second of two illustrations finished for The Vermont Children's Theater. For Newsies, I struggled with how to present the show in a different way. Most of the posters either had characters dancing, holding a newspaper and yelling or fists in the air with newspapers. I took a more subtle approach by demonstrating the aspect of a strike with the newsboy hat off and a stack of papers left alone. The energy of the musical comes in with the frenetic line work and the prominent “STRIKE!” on the front of the paper. I kept with a warm pallet to also denote the energy.

This was a huge win for me. I struggle with doing illustrations that do not play to my strengths. I took the challenge and found away to make it work.
Posted by Barclay at 9:24 AM No comments: 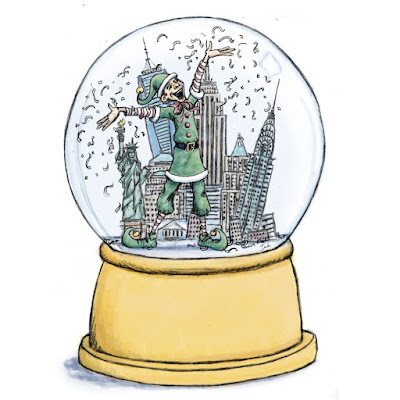 Just finished the illustration for The Vermont Children's Theater's poster for Elf jr. The Musical! I captured the magical, energetic feel of the show by placing the main character in a New York snow globe. The musical's Logo will be on the base of the globe. As I could not alter the logo, I needed to keep the base light.

The idea came from a scene where Buddy shreds a manuscript to make snow. 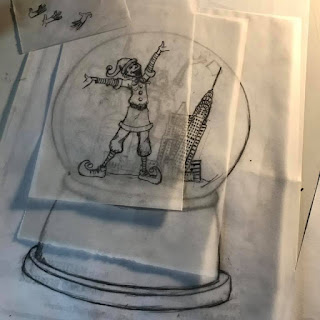 In between family time, I have been working on the illustration forThe Vermont Children’s Theater production of Elf Jr.Still struggling with the hands.
Posted by Barclay at 3:35 PM No comments: 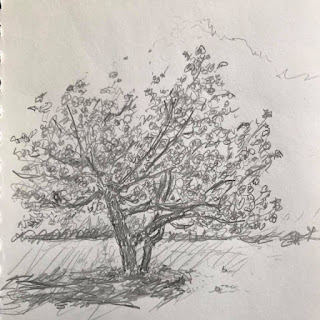 More practicing drawing trees. I wanted to try to capture the apple blossoms on our small tree in our yard.
For the summer I have set a goal to draw more.

Posted by Barclay at 8:45 AM No comments: