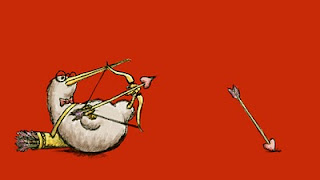 Happy Valentines Day
I find I really enjoy the kiwi bird. They are so awkward. This came to me Monday morning. I will be revisiting the idea latter. The creative possibilities are endless.
Posted by Barclay at 1:22 PM 2 comments: 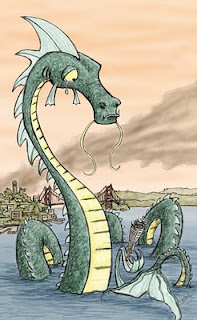 A brief history about the origins of this illustration:
After spending a week in San Francisco as part of my MA at Syracuse, Murray Tinkelmann asked that we each create an illustration that said San Francisco. I worked diligently on a bad concept that ended up being an even worse illustration. In the end, I came out of one of the worst critiques I have ever been in. Not only did I know I had a bad illustration but everyone else in the class had seen it as well. I think it was the beginning of my realization that I was trying to be someone else artistically.

A few months later I came up with this idea in my sketch book. I had wanted to complete it to redeem myself in some way before I graduated but the thesis took all of my time. Recently, I was looking for a project to do to demonstrate to my class my process and what I expected from them in terms of their process and this idea came to mind again. Apparently, I have a hard time giving up.
Posted by Barclay at 1:24 PM No comments: