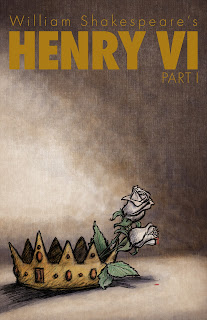 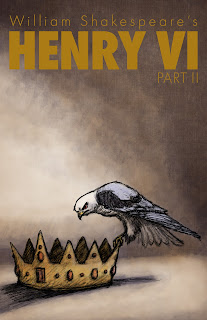 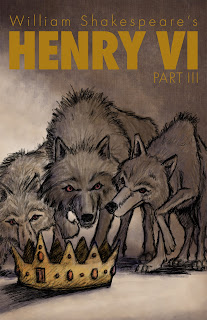 I love Shakespeare. For a few years now, I have been reading all his plays with the goal of creating a poster for each. It has been a challenging process. With Henry VI part II I started figuring things out. In act 2 scene 3, after Gloucester is found dead, Suffolk is accused without evidence. The Earl of Warwick gives the following reason:
Who finds the partridge in the puttocks nest
But may imagine how the bird was dead,
although the kite soar with unbloodied beak?
Even so suspicious is this tragedy.
This image of the kite hovering over a nest struck me. It seemed to say so much more than just the murder of Gloucester. I replaced the puttock's nest (a bird of prey like a kite) with the crown to emphasize the idea of the impending coup. I chose the black-winged kite because of the blood red eyes gave the illustration a more menacing foreboding appearance. From there, it started to click as I read more. For consistency among all the History Plays I would keep the crown and the Background the same. Then I would change the things around the crown depict something about the particular play. For Part I the War of the Roses started. For Part II, I referenced a line from Queen Margaret comparing Edward, George and Richard to wolves. In each poster there is also a small amount of red to depict the battle for the crown.
Now that I have a format for the Histories. I have a plan for Richard III and I will need to go back and read the prior plays to determine what to do for them.
This is also part of my current 100 somethings project to create 100 play posters.

Posted by Barclay at 5:29 PM No comments:

The Play's the Thing: Gallery Exhibit 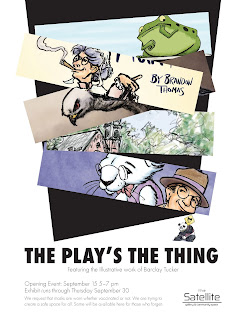 On Wednesday, September 15 from 5 to 7 I will be exhibiting my work at the Satellite Gallery in Lyndonville, Vermont. I will be showing over 25 years of theater posters as well as other examples of me playing around.

Here is a description of the show:

My work is all about play, whether it's a poster for an actual play (I love theater), or it is me playing around with my bow tie guys, recording my travels with on-sight sketching, or illustrating children’s books and coloring pages; it is me having fun. It is me trying to bring that sense of joy and fun to others.

Posted by Barclay at 2:02 PM No comments: