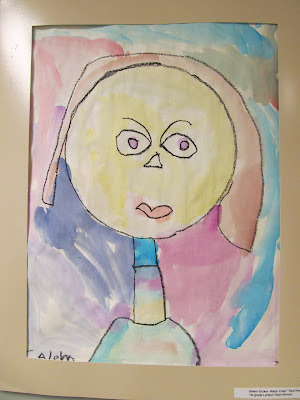 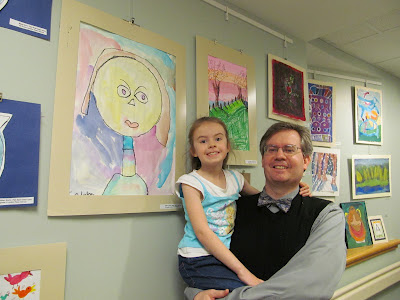 My youngest daughter had her first gallery opening at the local hospital last week. She had a painting she did based on the work of Paul Klee hanging with other elementary schools students art. It was an exciting evening and I personally found her work very sophisticated.
Posted by Barclay at 10:19 AM No comments: 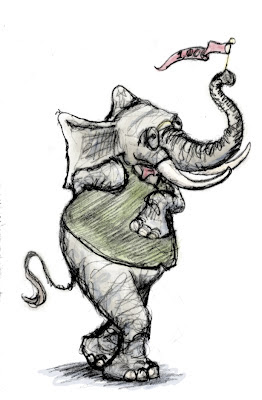 Today my blog will have it's 10,000th hit. It is a small milestone, but worth celebrating. As I have been saying over and over again “it is through small and simple things that great things are brought to pass.”
This is just another aspect of my illustration career that is making 2012 an exciting year for me.
I would like to thank each of you for your feedback, support, kind words and insight. As I move forward this year, I will be adding another aspect to the blog. Within the next few weeks I will be spotlighting different illustrators and artists, talking about their work and their lives.
As always please share with your friends and others that you might think are interested.
Posted by Barclay at 10:34 AM No comments:

A few years ago my brother sent me a link to the Kleefeld on Comics blog with his Comic Manifesto which inspired me to write my own manifesto on art in general. I have been reading this in my Art History classes for the past few years and it has been received relatively well. I was strongly influenced by Kleefeld's post. To clarify the difference between influence and plagiarism I will quote Murray Tinkelman. “It's inspiration when you steal ideas from other artists. It is plagiarism when you steal ideas from me.” So here it is (This is version 3.0).

1. Art (meaning the visual arts: Fine Art, Illustration, Photography, Graphic Design, Animation, Architecture, but this applies to theater, music, poetry, literature etc.) is inherently interesting and every variation of the visual arts is worth studying.

2. The culture that surrounds art and art creation is inherently interesting and worth studying.

3. ”Every art piece should be approached as free from as many preconceptions as possible; any given work should stand or fall on its own merits, or lack thereof.” (You cannot judge the quality the art by the morals of the artist.)

5. It’s ok to have fun at Art’s expense, but in the end you need to respect the Art and to a certain degree the artist. As Harry Anderson said, “If you can’t laugh at your self, you haven’t seen yourself sleep.”

8. “Every individual has their own preferences and, while a critical eye can be used to critique any given work, there are good odds that there will always be somebody who appreciates it and someone that does not.”

9. Critical analysis of art should not include personal attacks or judgments against their creator(s).

10. The enjoyment of art increases with the understanding of art.

11. Lend whatever support you can to those creators whose work you do appreciate and enjoy, even if it's only to tell other people about the quality of work they're doing. (Shameless plug to hire me to illustrate and or buy stuff I illustrate)

12. It has been said “Don't argue with idiots.” I would actually say, don’t argue period. Once you raise your voice people stop listening. Have your opinions, but listen to others no matter how strong you feel. But remember I am right.

13. There is no rule 13. I wanted to be able to get to 25 it’s a nice odd number–not as nice as a googolplex–but I really don’t have time to write a googolplex of items about why art is great and you would probably not want to read a list that is that went on much longer than 25. Unfortunately I was only able to reach 20 at this point. I am still working on the last five.

14. A critic’s evaluation of an art piece says more about the critic than the actual work.

16. You can’t come to an opinion of an art piece by looking at it for a few seconds or minutes. You need to spend time with it. Become it’s friend-then you can hate it.

17. All art is connected. The key to really understanding and appreciating art is to understand as much of art as a whole as possible -- that means studying the history of the medium and its creators; influential works and cultural references both within and outside art; the creation, production and distribution processes; contemporaneous as well as current reactions to works; etc.

18. Read The Art Spirit by Robert Henri and How to Understand Comics by Scott Mcloud. These are must-reads.

19. I understand that many of these contradict one another. I am ok with that and I firmly believe that it still works despite the contradictions. To my knowledge the paradox I have set up has not created a cataclysmic celestial event that will bring about the end of the world as we know it. That was Wal-Mart with the paradox of getting more for less. For that matter it probably wasn’t Wal-Mart that came up with it, but they have promoted it well… but I digress.

20. Art is connected to everything we see and do. It has influenced science, music, literature, films, theater, sports, entertainment everything. All things can relate back to a discussion of art.

Posted by Barclay at 4:45 PM No comments: 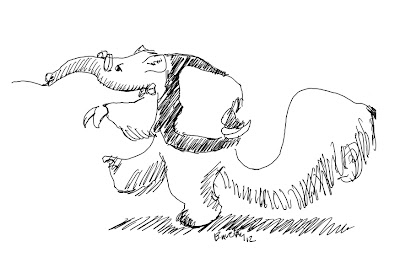 Anteater (ˈantˌētər)
Last week I received the Wacom Inkling to play around with to see if we were going to purchase some for students to check out. The Inkling is a pen and a storage device that records the pen-strokes as you put them on the paper. If you want to see more you can go to the Wacom Site here.
The second image is my first sketch with it. The one above it is my pencil drawing. I will be testing it out over the next few weeks and posting different drawings with it. I am not used to drawing with a pen so right now it is a little rough around the edges. It is pretty nifty.
Posted by Barclay at 10:42 AM No comments: 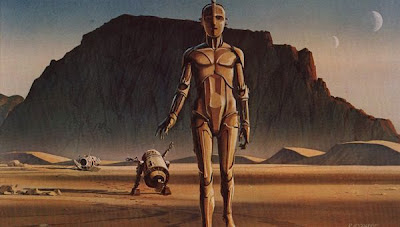 Ralph McQuarrie passed away at the age of 82. A friend of mine put it in words that are much better than anything I could write. You can see his post here at Life Needs Art.
For my part, Star Wars was a movie that changed how I saw things. The visuals that Ralph Mcquarrie created were a major part of that view. I know he not only influenced me but many others as well.
He was a master.
Posted by Barclay at 7:46 AM No comments: 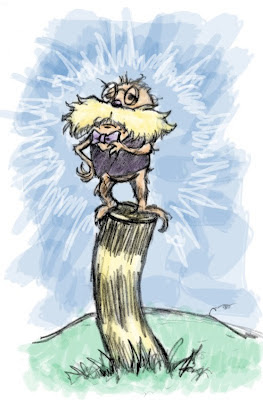 In honor of Dr. Suess' birthday, I put the Lorax in a bow tie. Dr. Suess is quiet possibly the most influential children's book writer and illustrator that has lived. I know for me he had a great impact on my art. His books are insightful, fun, witty, and intelligent. He never underestimated the knowledge of a child. I am forever grateful for his contribution to our society.
“I like nonsense, it wakes up the brain cells. Fantasy is a necessary ingredient in living.”
Dr Suess
Posted by Barclay at 8:06 AM No comments: