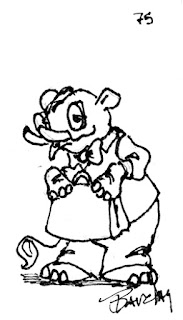 This was an attempt at a visual joke that I did not push far enough. The idea was that the elephant was holding his trunk. After I showed it to people, thinking it was really funny, I realized trunks are bigger. The joke was lost. I will rework this one someday in the future.
Posted by Barclay at 11:00 AM