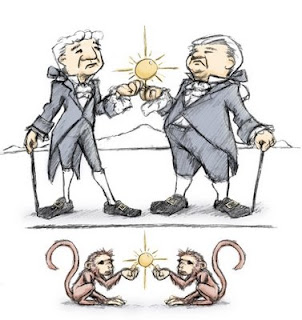 This is an image that has been running through my head ever since it appeared in my sketch book a few years ago. With all the grading I've been doing for the end of the semester, I needed a release. I realized I had not drawn in a while, so I gave myself an assignment from Illustration Friday to do an illustration in less than a week so I could keep sane. I 'm not really sure if there is a specific meaning to the image. The title “The Evolution of an Idea” keeps coming to mind.
Posted by Barclay at 9:18 AM

Great drawing and nice symmetry. See, here's the difference between you and me. You, being the educator, think "evolution of an idea." I, being the fool, think "wonder twins, activate."